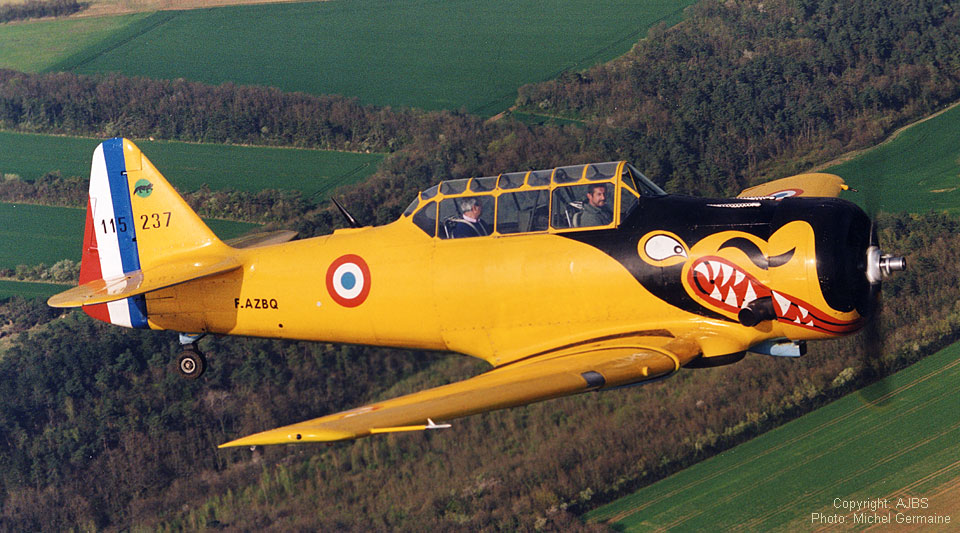 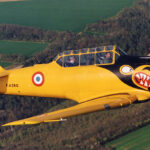 Built in 1951, this aircraft was first used by the French Air Force with the F-UJL marks, then F-SFK assigned to the EALA 3/4 squadron.
Pilots from the 4th Squadron were sent to Algeria from 1954 to 1962 for law enforcement missions. The Wing received sponsorship from the E.A.L.A. (Light Support Aviation Squadrons) 5/70 and 7/70. Reserve pilots came to reinforce the workforce. They first operated on NORTH AMERICAN T-6G Texans. The E.A.L.A. 5/70 and 7/70 became respectively, EALA 17/72 on December 1, 1956 and EALA 18/72 on July 1, 1957. On November 30, 1959, the squadrons were dissolved and then recreated within the E.A.L.A. (Light Air Support Squadron) 3/4. In 1961, the T-6G were replaced by the T-28 Fennec. It was then registered F-BEOE and based at La Ferté Alais in 1982.
In August 1984, it was registered as a CNRAC (permit arcraft) registered F-AZBQ and painted in the colors of a T6 of the Army.
Within the AJBS, it has participated, with Jack KRINE, Jean Pierre LAFILLE and a few other pilots, to numerous airshows, including several “Aviation Tour of Young Pilots”. It also wore some fancy  liveries for the cinema.
Mid 2002, following a perfect landing gear retracted, it was taken into account by a small team of volunteers, under the leadership of Jean Pierre TOUBLANC to be completely dismantled and restored; the control surfaces were recovered, the electrical wiring redone and many used parts replaced.
In 2009, it received a new paint in accordance with its decoration within the EALA 3/4, with the famous shark’s mouth, and it gained a rebuilt engine acquired from Covington Aircraft Radial Engine in the United States.
(Presentation by AJBS, translation © Izavia )