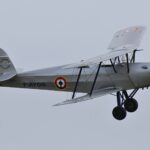 The Stampe SV-4 is an aerobatic training biplane.
It was designed by Belgian Jean Stampe and Maurice Vertongen, who started producing it in 1937.
After the war, France produced nearly a thousand. SNCAN (Société Nationale des Constructions Aéronautiques du Nord) manufactured 701, and the AIA (Industrial Aeronautics Workshop) of Algiers 150, including the one presented here.
The Air Force presentation squadron, ancestor of the Patrouille de France, was even equipped in 1947.

F-AYGG, built in 1949, was first based in Cuers and used for training Naval Aviation pilots.
It was transferred to Niort in 1957 in the sport aviation service and joined the United Kingdom in 1969. It then crossed the Atlantic after being bought by an American in 1975. It ended up returning to France in 2015, when it was repatriated to Saint-Cyr-l’École.