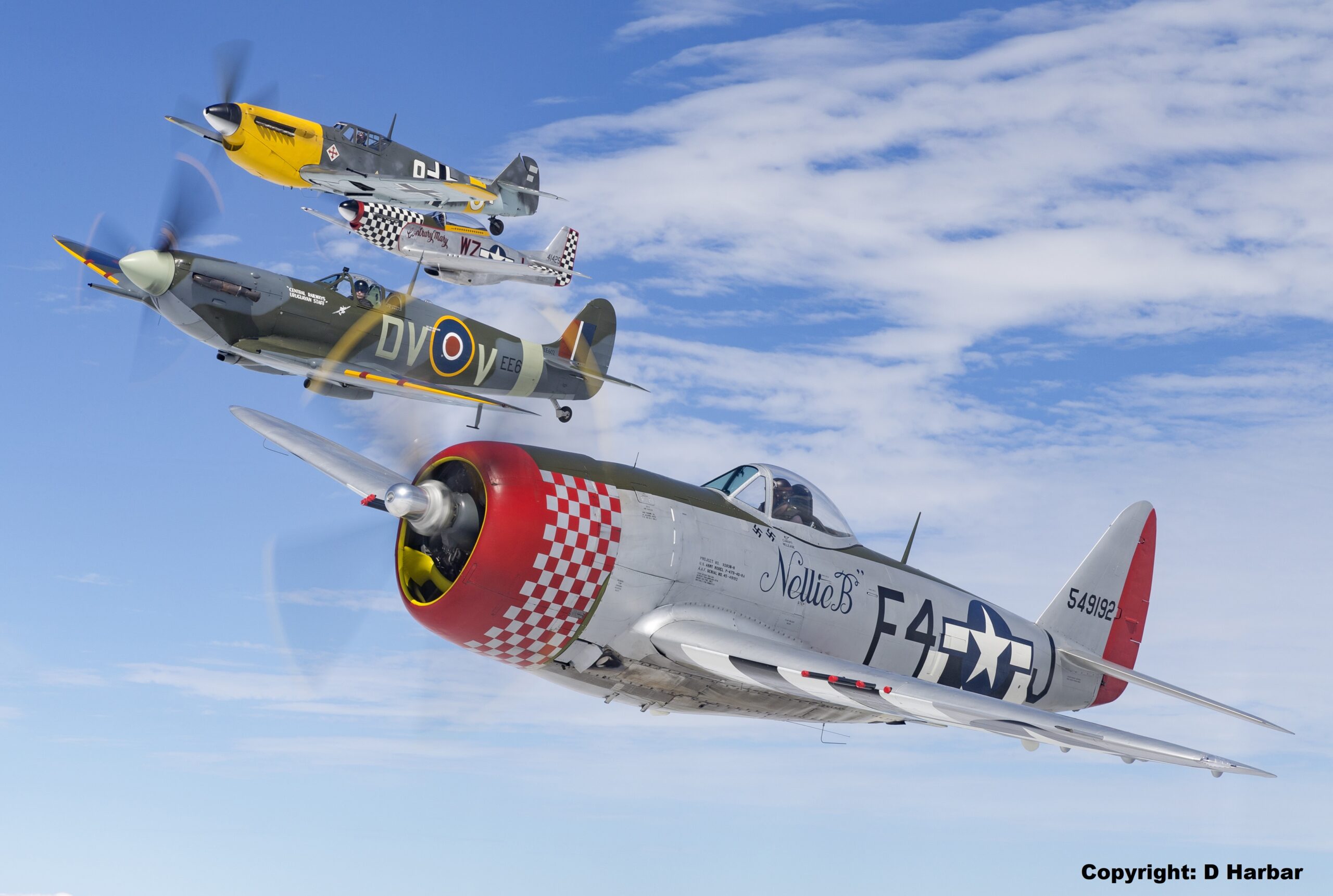 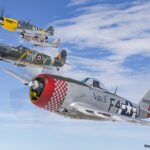 For the first time in France, the exceptional ‘Ultimate fighters formation’!
Leading the formation is Jon Gowdy flying ‘Nellie B’, the much-coveted P-47 Thunderbolt (G-THUN).
Dave Puleston flies in the number 2 position in a Mk V Spitfire (G-IBSY).
Richard Grace is piloting the Spanish licence built ME109 (Buchon) ’White 9′ (G-AWHH) in the number 3 position and Andy Durston completes the line-up flying ‘Contrary Mary’, a TF-51D Mustang (G-TFSI) as number 4.

Display
After the aircraft take off, they will climb up to around 4000ft (airspace and weather permitting) to gain the maximum energy to start their display. Here they will form up and await the call “commence display” from the Flying Display Director. Swiftly diving down as a formation, the team will aim for a minimum of 300kts on the first pass before performing a series of aerobatic manoeuvres as a 4- ship, including loops and wingovers.
Some further passes and an oblique loop places the aircraft right in front of the crowd. And the sound – well it’s just awesome. Three merlin engines, all with slightly different inflections, combined with the deeper roar of the Pratt and Whitney R2800 in the Thunderbolt create something quite unique. At various speeds and wing loadings various whistles and whines of gun ports, superchargers and airflows break through the sounds of the roaring engines.
After a few minutes of energetic manoeuvres as a 4-ship the formation positions onto the “B-Axis”, performing a dynamic “break” right in front of the audience. This is where the excitement notches up a level! The Spitfire and ME109 now start a mock dogfight, with opposition passes at high-speed and low-level. Let’s see who ends up winning the fight! Whilst this is going on, the Thunderbolt and Mustang sneakily disappear and climb for height. Once the winner of the German vs Allied fight is decided, the Thunderbolt and Mustang will perform a series of close formation aerobatic manoeuvres. Having split from the Spitfire and 109, the pair can run significantly more power and fly loops, barrel rolls, half Cubans and quarter clovers, time permitting. During one of the passes, the Spitfire and 109 will chase the American Pair down and join up during a wingover. A final few passes as a 4-ship will see the whole formation arrive for the Run-In-And-Break Manoeuvre, to set the spacing for landing.