Note : You will be able to purchase the event’s poster (and previous ones) during the airshow, on the Paquet Editions stand, as well as soon on the web site of the cockpit Collection.. 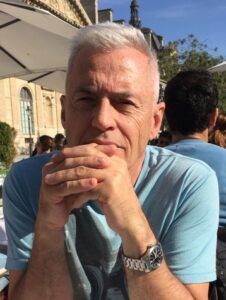 Graphic designer, illustrator, graduate from the Esag Penninghen, Olivier Dauger has been drawing for over thirty years for press, communication, and advertising.
Fan of the ligne claire and of the Franco-Belgian school, he is fond of the 1930’s-40’s (history, design, architecture… and aviation).
He is an ardent admirer of the work of E.P. Jacob, Chaland, Serge Clerc. From 2006 to 2011, his series Ciel en ruine (sky in ruins) sets him as one of the best aeronautical graphic novels artist.
The series Ciel de Guerre, followed by the biography of Hélène Boucher (written by Didier Quella-Guyot) confirmed his talent. His mastering of the aviation theme leads him to be nominated official “Peintre de l’Air et de l’Espace” in 2019.

A Jack of all trades, he also dived into the investigations of Miss Marple and into a political polar titled Les Frères Nowak.

The P-51 Mustang was initially developed during 1940 to meet the urgent need for fighters for the Royal Air Force.
Although it performed well at low altitude due to its aerodynamic qualities, its Allison V-1710 engine initially limited its use as an air superiority fighter, due to poor performance at a high altitude.
Following the adaptation of the excellent British Rolls-Royce Merlin engine, the aircraft became the escort aircraft needed by the United States to escort its large daytime strategic bomber raids  and achieve air supremacy over Germany.