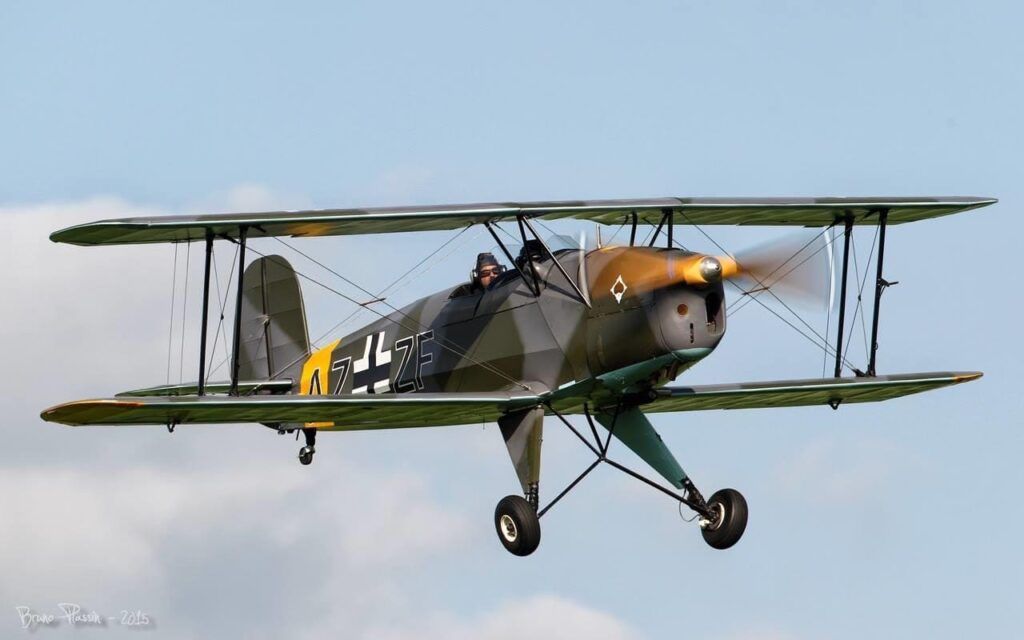 The Bücker Bü 131 Jungmann (young man) was a training biplane built by Bücker Flugzeugbau that was used by the Luftwaffe during World War II.
The Bü 131 was the last biplane built in Germany. It had two open cockpits in tandem and fixed landing gear1. The fuselage was made of steel tubes, covered with fabric and metal, the wings of wood and canvas.
Designed by Swedish engineer Anders J. Anderson, the prototype made its first flight on 27 April 1934. The production version was used in flying schools and by the then burgeoning Luftwaffe, which used it for its excellent flying qualities, especially in aerobatics.
A total of around 5,000 were produced, of which 3,000 in Germany (including licences).
In Spain, production continued at CASA until the early 1960s under the name CASA 1131. The Jungmann was used for ab initio training of Spanish Air Force pilots until 1976.

This aircraft, the CASA No. 2128 left the factory on 21 December 1957.
It was then incorporated into the Spanish military aviation under the number E-3-B-502.
On 30 December 1976 it was withdrawn from service and sold six months later for 2,530 Euros (421,600 Pesetas) to Jose Vicente Martin, who transferred it to the USA.
It was bought back as a restoration project in 2008 in the USA and transferred to France, where it flies today.